SMITH HONDA CR1 BACK ON TRACK

My first race at Mallory park on CR1.  note to self get fitter!!!!

Access to holding a race licence has not been possible for me for medical reasons, But that has changed over the past couple of years and I decided if I can get one now I will take the opportunity to ride one of my Honda’s in an actual race,  I will get to see what was actually like for Rob when he raced it.

So I chose Mallory as its a circuit I had ridden and not to many corners for my rubbish brain to deal with. Race day is all quite daunting for a newbie to take in, plus it poured with rain. It was good that there was one other newbie whom i’d met on my  licence course so at least I wouldnt be on my own at the back!!!.

So all in all a great weekend, I constantly improved and worked my way up the grid enough to actually see the starting flag. Sunday was dry and thats when I really discovered how much work needs to be put in to get that bike round. the brakes are awesome and it surprised me how good the engine was compared with quite a few bigger engined ducati and suzuki powed machines.

I had this BMW 1000 keep showing me his wheel going down the straight, but managed to hold him off most of the race, then I messed up gearchange on last lap and he had me,  I did’nt realise what effect that had on me, its like I gave up, Conor on the pit wall thought I’d had a moment because i’d slowed so much.

The bike is more capable than me at the moment so got to get fitter and find a way to get her round a bit quicker.

finished 5th in class i think but I wont tell you how many in class,  but I was’nt last. 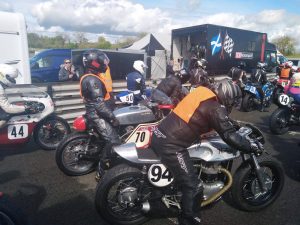 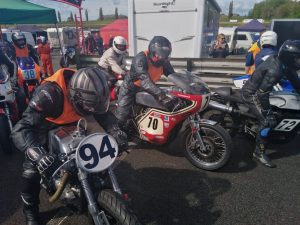 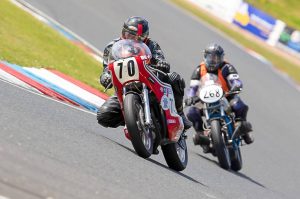