So a while ago this enthusiastic chap from C4 he who dares wins tv series, walked through my door and started drooling over all the cb750 stuff.

Long story short,  his bike ended up here for a bit of an upgrade.

So his bike already had been modified, and styled as a flat tracker with knobbly tyres and flat seat, and some very expensive yosh carbs, the work unusually had been well executed but the exhaust made your ears bleed as it had no silencer, and the carbs left a trail of fuel everywhere.  But Ollie wanted a full makeover with the ceracote treatment etc etc.

Engine was duly removed and stripped, everything was treated to the satin black ceracote and while it was stripped we went for the 836cc big bore with street camshaft.

to quieten it down and make it tuneable I fitted a Delkavic stainless yosh style system which worked really well as we could kick it up a bit more due to not having pillion bracketry.

when it came to the carbs, I discovered the tank was rotting out and somebody had poured in tank sealant which was peeling away and hence why carbs were full of crud and leaking. So a replacement tank was found which meant a complete respray was required,   at the same time Ollies trade mark, the “double O” was created in a gold highlight and the 750 four logo in same colour added to side panels.   I think it made a tasteful, not too in your face finish to the bike.

He loved it,    I was worried i’d given it a bit too much power as its a bit racey for a knobbly tyre’d machine like that,  but it seems to have gone down well, and we expect a full build special to create for him soon. 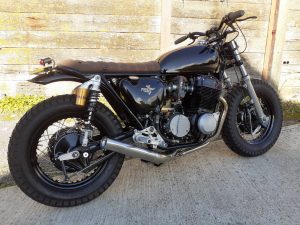 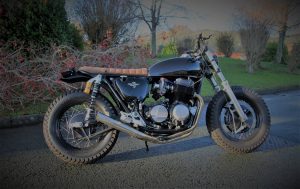 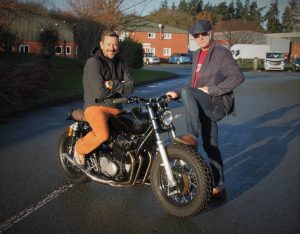 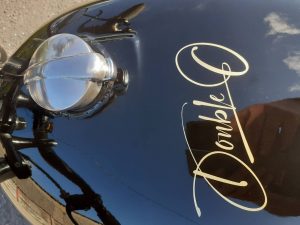 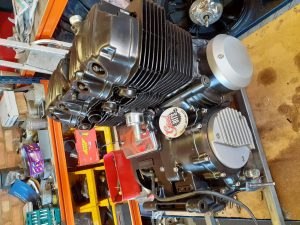