The Classic Bike Trackday guys had a racing test day at Castle Coombe.

Having made all sorts of plans with Becks (Tipsy94) during winter, I have the realisation that there is loads of stuff we’d like to do but actually doing it !!!!  well we will see.   I thought I would’nt be back on the bike again after suffering some health issues in january, but we had a real proper test with Bimota/CR1/SV650.   We were supposed to be testing TZ350 as the plan was for us both to discover the attraction of a 2 stroke, but as I am finding out, making plans happen etc. 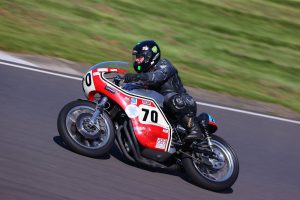 My fitness last year was a problem, But getting out on the mountain bike a bit beforehand, definateley helped, we ran 6 full sessions and I found I was only slightly flagging at the end, Its weird but when fatique sets in it seems to be last lap, when I start missing gears and turning in wrong place, goes wrong very quickly.

Becks ran her SV650 Suzuki, and got out on CR1 to have a proper go, I could see she was feeling her way round and getting used to it, after all different tyres and a 1970’s bike a bit different to her 2000’s SV.   Hopefully I can encourage her into the Classic Paddock, after all the bikes are old, but they are certainly not slow. 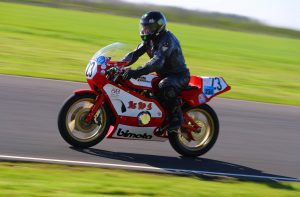