So some unfinished business you could say,  The first race for my newly built CR-S chassis back in 2019 was a bit of a disappointment as the engine failed while leading the race.

With covid kicking in and my plans to race my bikes myself taking priority, I was’nt really thinking about Goodwood again.

But Rob,  my original rider when we developed my machines together, was really keen to get back there, I was’nt so sure.

Things were different now with Grand Prix 2 strokes mixing it with us F750 4 strokes now, and with no racing for rob at all for 3 years I reckoned it would not be an easy task. 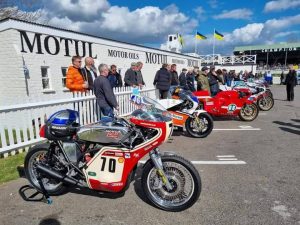 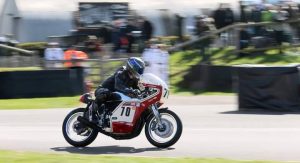 I gave Rob the bike and decided to let him take it if he could get an entry.    once we got the nod we were in, so the build up began,  time on dyno, going through bike, then getting all the spares together, almost a whole bikes worth of spares ends up going.

Anyway The grid was 32 bikes and some really strong riders were there,  Robs practice did not go well, his pace increased quite quickly and then the realisation that the bike was under-geared meant he was running out of revs on the fast bits, and getting tangled with a TZ that was quicker in some places and not in others sort of messed it all up.

Starting further down the grid with only 7 laps to get stuck in not a great place to be,  especially when the majority of the bikes in front were 2 stroke GP bikes,

So a real battle ensued up front and lap times dropped further,  But they got away leaving Rob chasing in 8th place.

Finishing  2nd F750 Bike and 7th overall,   a smashing result   (1st Honda)  But still wrong gearing and this year the TZ were so strong.

Just goes to show, my new chassis is a real improvement, But you still need the combination of Rider and Machine to get the results.